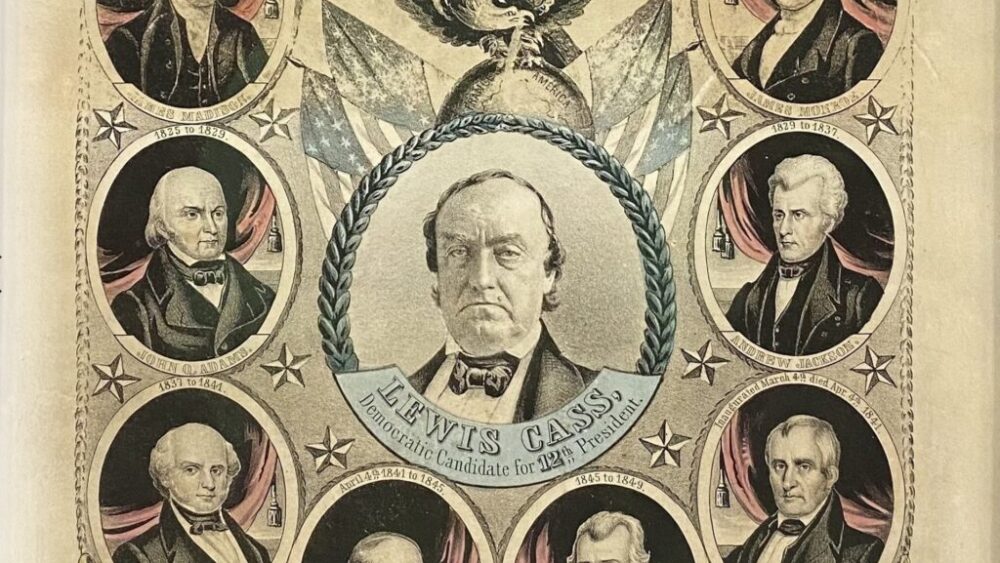 Currier Before Ives: Conservation of an 1848 Democratic Presidential Campaign Lithograph 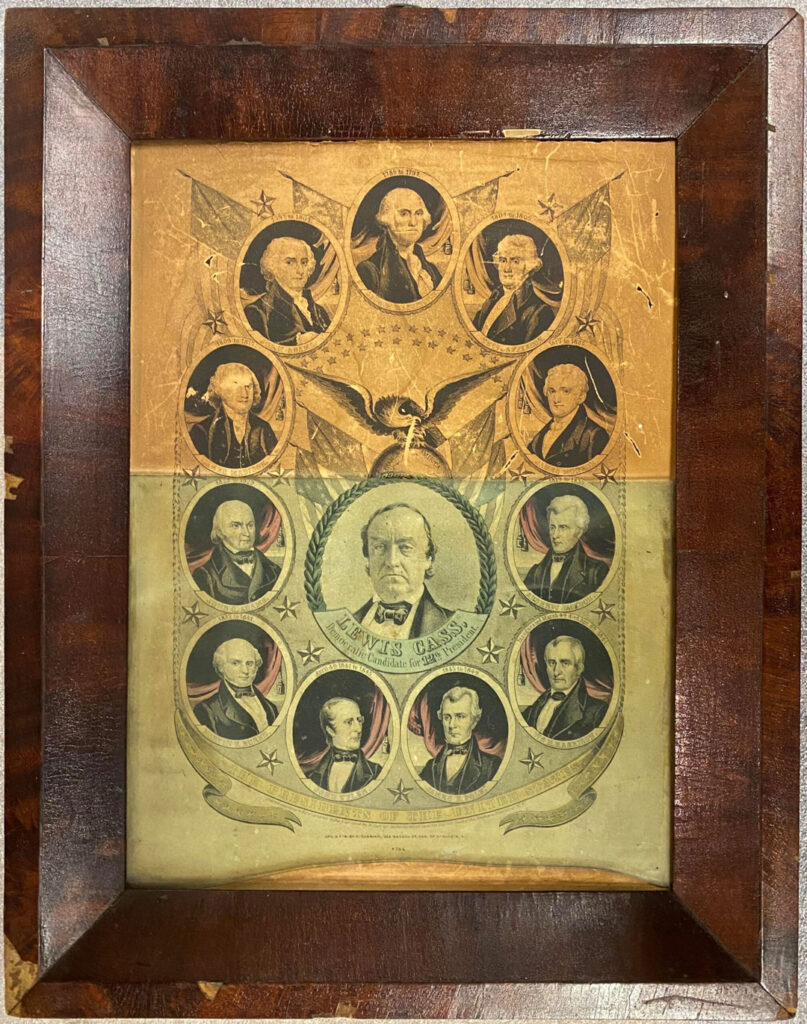 This lithograph of “The Presidents of the United States” published by Nathaniel Currier (American, 1813-1888) arrived at our studio in poor condition with water staining,  discoloration, tears, and creasing. The glass on the accompanying frame was broken and the upper half missing, which left the sheet open to years of uneven exposure. The antique frame itself had several areas of veneer delamination and loss. The acidic wood panel backboard was in direct contact with the print which contributed to the lithograph’s deterioration.   It was easily discernable the improper framing of this work led to its current condition and several issues, which needed to be addressed. 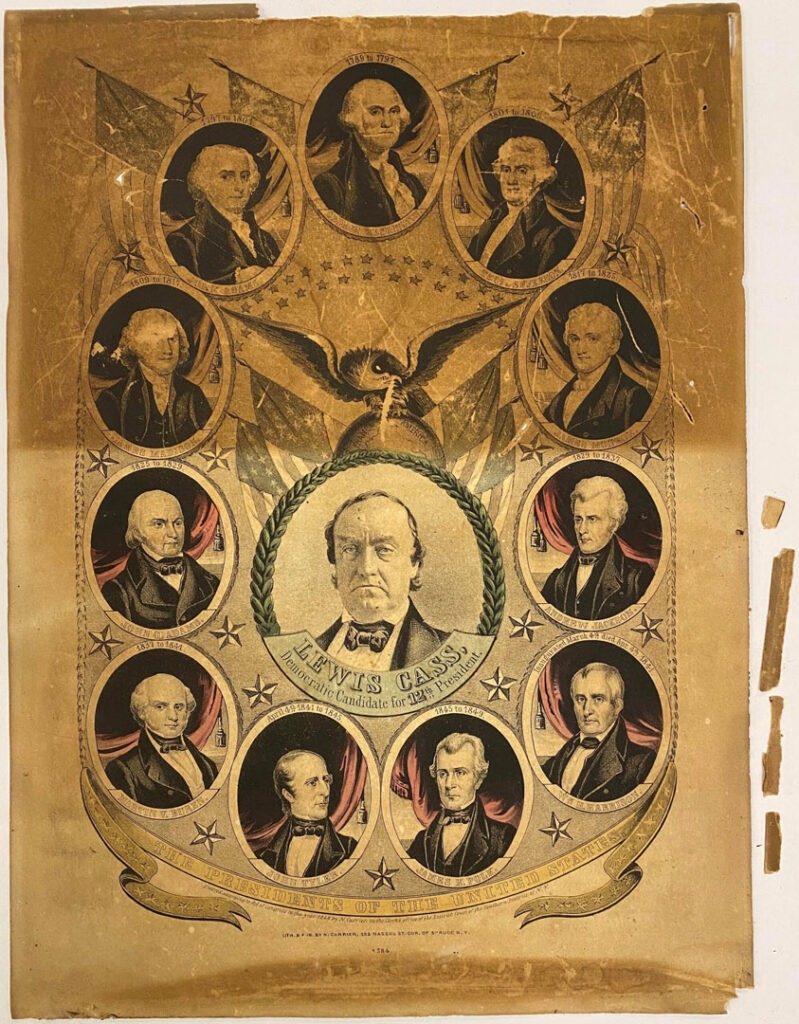 Currier was a successful lithographer long before James Merritt Ives (1824–1895) joined the business in 1852. Currier established his business in New York City in the 1830s, and had his first financial success in 1840 when he issued a lithograph depicting the “Awful Conflagration of the Steam Boat Lexington.” He followed up this success with a series of disaster prints and soon realized the importance and demand in producing works depicting recent events, political cartoons, and banners. This print pre-dates the arrival of Ives to the firm.  Ives married Caroline Clark in 1852, who was the sister-in-law of Nathaniel Currier’s brother, Charles Currier, who recommended Ives to his brother. Soon after being hired, Ives became the general manager and in 1857 became a full partner when the firm changes its name to Currier & Ives. 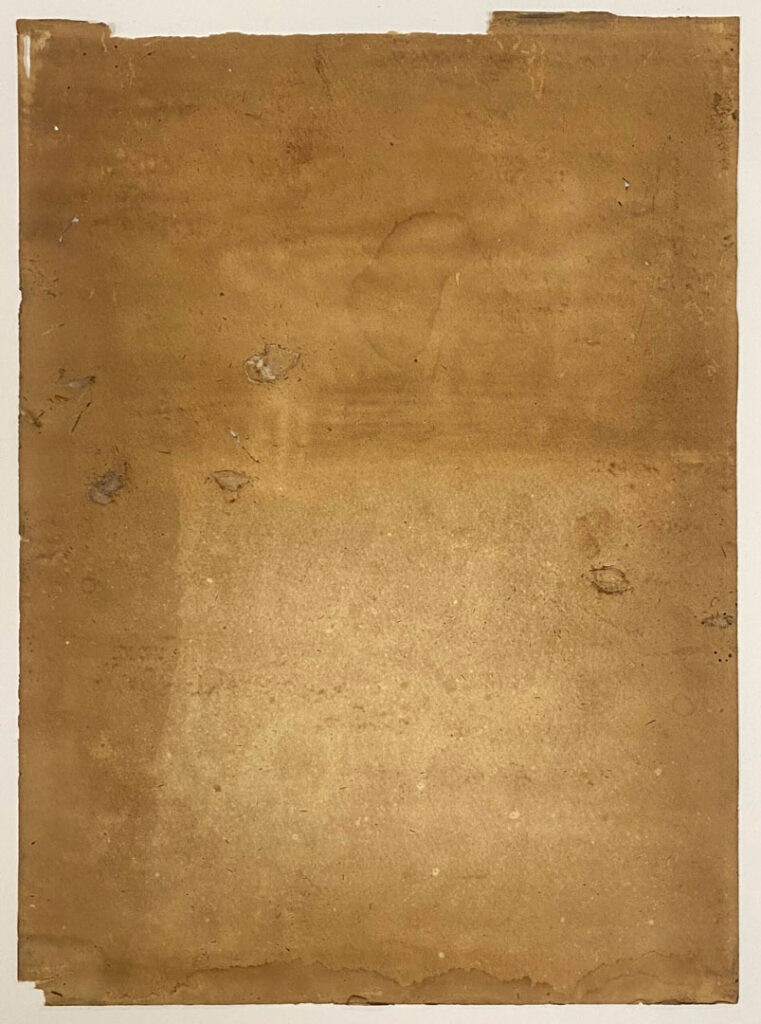 The 11th President of the United States, James K. Polk was not running for re-election, so the Democratic race to become the next presidential nominee was wide open. The two leading contenders were Lewis Cass and former president Martin Van Buren. Cass had been a brigadier general during the War of 1812, served as the governor of Michigan for many years. Cass was also the Secretary of War under Andrew Jackson, and a Senator from Michigan at the time of the 1848 election. Democrats hoped that Cass would be attractive to a wide variety of Americans because of his views on slavery. Cass advocated popular sovereignty. Under popular sovereignty, the people residing in a territory would decide whether or not their state would allow slavery” (ohiohistorycentral.org).

Cass ran against Whig party candidate Zachary Taylor, a hero in both the War of 1812 and the recent Mexican-American War, slave owner, and political novice who had never even voted. Taylor along the way neglected to adopt an official platform as the Whigs avoided addressing any contentious issues and no platform. The Liberty Party formed the Free-Soil Party, which pledged opposition to the extension of slavery and nominated Martin Van Buren, who broke away from the Whig party, to lead the way.

The presidential election of 1848 saw Whig candidate and war hero Zachary Taylor win the presidency over Cass by a margin of 163 electoral votes to 127 with Van Buren failing to gain any votes. After dying two years later in 1850, Taylor was followed by his vice president, Millard Fillmore, an anti-slavery Northerner who became the 13th President of the United States of America. The presidential election of 1848, become known as the “Free Soil election”, bringing the antislavery sentiment to the forefront as a determining political issue on a national scale. 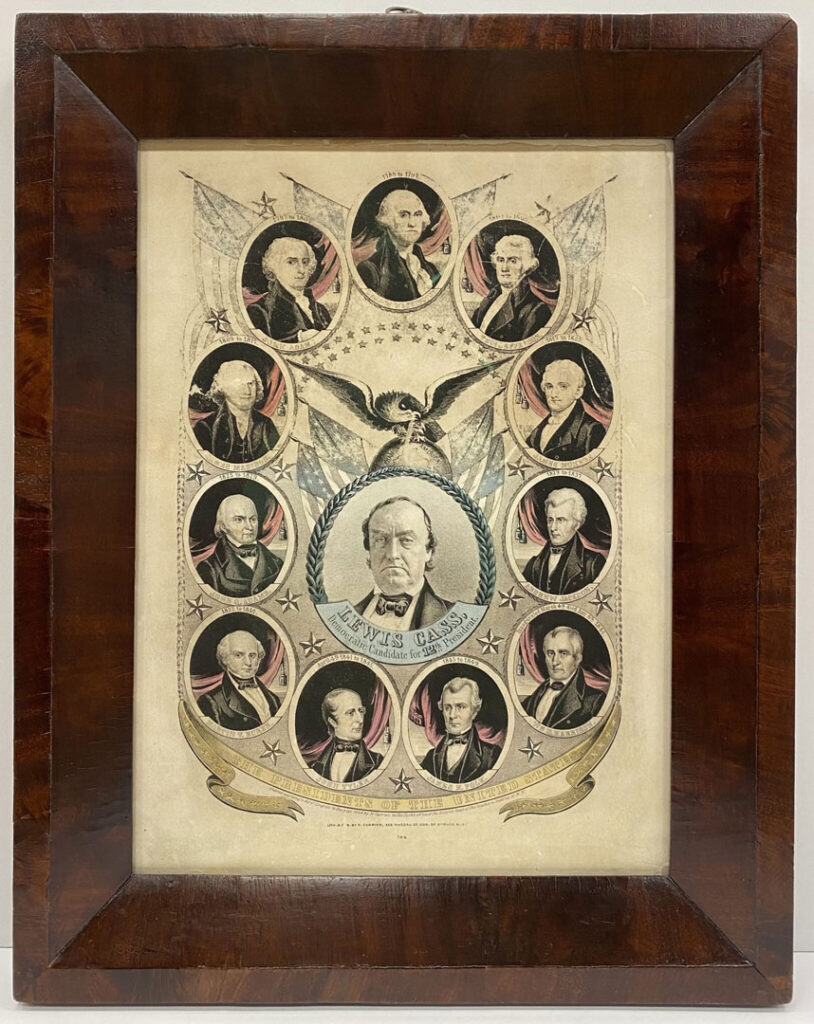 The lithograph was carefully surface cleaned and the sensitive colors were protected prior to washing. The sheet was blotter washed using buffered hydrogen peroxide aided by light with attention to the heavy staining to reduce discoloration, relax the support and improve the pH balance.

The compromised fibers in the creased, torn, and damaged areas were consolidated and the sheet was supported with Japanese tissue and an ethulose adhesive. The areas of tears, losses, micro-breakages, severe creasing, and handling dents were supported from the verso with sutures of Japanese tissue.  The overall tone of the discolored top portion was corrected to minimize the juxtaposition between the two areas and toned with light-fast conservation-grade pigments.

The frame was lightly surface cleaned, the areas of lifting veneer consolidated and stabilized, and the areas of loss were infilled with a comparable veneer. The veneer fills will be locally varnished and a protective coat of wax was applied and hand buffed to harmonize the sheen on the overall frame.

The conserved print was archivally assembled into the treated frame with spacers, archival mount and backing board, and UV filtering Museum Glass.

This treatment campaign provided striking results for both the print and the frame. Our team revitalized this work by Currier and is now on display, preserved, and properly framed.  To learn more about how we can assist with the preservation of similar works on paper, whether artwork or historic documents contact Artifact for an evaluation.